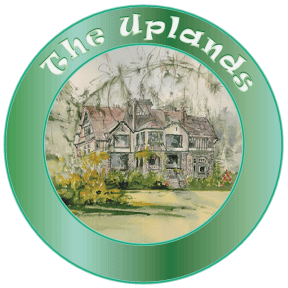 The Uplands, Victoria's most Exclusive Neighbourhood.

Uplands is an area of luxury homes on large properties ranging from a quarter of an acre to three acres and an average size of half an acre in size, featuring some of the finest Real Estate on Vancouver Island and containing only a handful condos and townhomes.  The subdivision was originally planned in the 1920's by the Olmstead brothers of Chicago. John Olmstead was a famous landscape architect who would spend days walking the expansive 450 acre Uplands Farm property to map out it's intricate road network.  Even then, it was said to the most beautiful property in Victoria, getting sun all day, studded with Oak trees throughout, and shielded from wind on all sides.

Today, the Uplands is reckoned to be Greater Victoria's finest residential neighborhoods, but back in 1923 strangely enough it made heavy going and the developers owed Oak Bay Municipality $79,000 for taxes. When the municipality tried to foreclose it discovered that all the taxes were in default except those on lot 1. Lot 1 covered all roads within the Uplands estate. If the municipality had  foreclosed it would have had no readily available access to the property.  Unfortunately early records of its transactions and of land deals in Oak Bay generally were reduced to pulp when the basement of the old Municipal Hall, corner Hampshire and Oak Bay Avenue and now the location of the Bank of Nova Scotia was flooded in 1955. 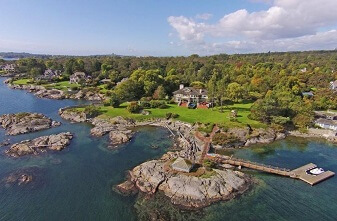 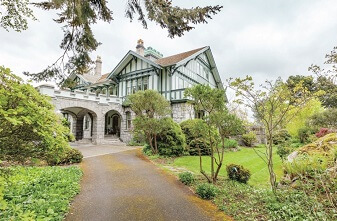 French capital presented by the Credit Foncier promoted the now beautiful Uplands development. Full page advertisements in that year were asking $2,500 to $5,000 a lot but there were no takers and for many years there was only one resident, Andrew Wright, in the Uplands. His home at 3175 Beach Drive is now that of Hubert Wallace. As if to confirm its glimmerings of the eternal, Oak Bay has The Uplands, a residential area so well conceived and resolutely maintained as to have approached, in the words of a university professor, a state of immortality. The 465-acre subdivision, formerly part of the Uplands farm of the Hudson's Bay Company, was developed by a daring consortium in pre-First World War boom days.  It's planning was based on the garden city concept then popular in England and the United States. The idea was to have a central axis - Midland Way- and, following the contours of the curving boulevards, spacious view lots on gently-sloping benches, and abundant green spaces. There were 523 lots in all. And wonder of wonders for its time and place, this subdivision had paved roadways, underground utilities, and a streetcar line to downtown Victoria.

Although not the first residence, the Andrew Wright mansion called Riffington, at 2991 Beach Drive, was built as the showplace. Wright, Scottish-born, had made money in real estate in Winnipeg, and was a director of the development firm, The Uplands Limited. He chose prime seafront acreage for Riffington. The construction materials - stone from Haddington Island off northern Vancouver Island, lumber, imported hardwoods -were barged to the site, and under the combined efforts of a small army of skilled tradesmen and laborers, the grand home rose in 1911.

It stayed in the family until 1946 when Wright's son, Andrew, now in a Victoria area nursing home, sold to shipbuilder Hubert Wallace. "The architect, I believe he was from Vancouver, must have been outstanding," Wallace says. A set of blueprint plans dated 1913, on file in the Oak Bay municipal hall, shows the architect as Philip A. Jullien, of Vancouver, of whom little is known. "Riffington was way ahead of its time," Wallace continues. He is standing by an oak table with a white azalea on it, in the center of Riffington's marvelous two-storey, octagonal entrance hall, rose-windowed at its dome and galleried at the upper level. The rooms radiate from this central focal point. Four bedrooms, each with a full bathroom and dressing room, occupy the entire upper floor.

These rooms as well as those on the main level – the living room and the dining room, both having wide sea views; a French drawing room and a billiard room, all superbly proportioned, look out onto acres of manicured grounds that include Victoria in its early years was a very scattered and largely pastoral settlement. The farms were very different from those in crowded Europe; they consisted of a comparatively small area of cultivated land and much waste land over which cattle roamed. Uplands Farm, for instance, which was started in 1851 in what is now part of Oak Bay Municipality, consisted of a few farm buildings while cattle grazed in an area bounded by Cedar Hill Cross Road in the north, Camas Lane in the southeast, above Allenby Street in the south, Richmond Road in the west and the shoreline in the east.

A Japanese garden, a cottage, and a modern glassed cabana by the seafront swimming pool. The billiard room is now a library, and the conservatory has been turned into sundecking, but there have been no real structural changes. Riffington's 10 fireplaces have been retained, and the original central heating system has been updated. The swimming pool, built by an adjacent property owner and shared with Riffington, was bulk headed and tide controlled. A former Duke of Kent swam there when Andrew Wright Sr. owned Riffington, as it was the only one around with a pool of bracing, sun-warmed saltwater. And, since the time Wallace improved the design, Princess Margaret has also disported there. The diving board is the original one. The Uplands' fortunes, after Riffington was built, took a less-than-steady course. During and after the Great War, development was slow, and the company got into financial difficulty.

Construction picked up during the Depression, paradoxically, when labor was cheap for house-building, yet by the end of the Second World War, more than 30 years after its creation, the subdivision was less than one-quarter filled with homes. Today, The Uplands is 95 per cent complete, with residences ranging from gabled Tudor revivals to low, rambling ranchers, all protected by rigid restrictions of one sort or another. Urban renewal is something the plush Uplands will never - hardly ever? - have to contemplate. It is, as the saying goes, safe as houses.

As far as anyone can foresee, in contrast to most other residential districts, high-quality renovation and renewal will go on indefinitely. The more affluent owners maintain their high standards of upkeep by employing private gardeners and live-in household staffs. Here one still sees the traditional Chinese manservant, in white, high-collared jacket and black pants, omnipresent, gracious, standing hands behind his back yet ready at an instant to open doors. The Uplands seems indeed to have assured itself of immortality.

Keeping a cow in Uplands

The seafront home of businessman and industrialist Harold Husband at 3150 Rutland is remarkable in itself- an Uplands mansion built in 1913 for Lieutenant-Governor T.W. Paterson as his private home - but off the shoreline are the quixotic relics of Paterson's determination to keep a cow come hell or high water. Extending seaward is a small causeway leading to a rocky islet, and on that rocky islet, ee-eye-ee-eye-o, is a shed that once sheltered his Jersey cow. Like clotheslines, cows were forbidden in the exclusive Uplands, so the unconventional Paterson deftly circumvented the rules by buying the rock outcropping from the Hudson's Bay Company, which then still owned offshore islands. There he stabled his cow. She ambled ashore in the daytime for pasturage, then went back home at night, over the footbridge

What is now the Uplands Golf Club and the Uplands Park were part of the grazing lands. Cattle Point is so named because cattle were landed there to fatten in the Uplands prior to slaughter in what was then called ro-Mile Point, but is more probably the site of the Royal Victoria 5 Yacht Club moorings on Beach Drive where, even today, cattle skulls and other relics of a slaughter house are seen in the water. First manager of the Uplands farms was Charles A. Bailey.